His Highness Sheikh Mohammed Bin Rashid Al Maktoum, Vice President, Prime Minister and Ruler of Dubai, reaffirmed the UAE’s commitment to transform the challenges of climate change into future opportunities for the next generation, as well as work closely with the United States, the global community and the private sector to make a step-change in the global response to climate change.

Addressing US President Joe Biden’s virtual Leaders Summit on Climate Sheikh Mohammed said: “Although the UAE is one of the largest oil exporting countries in the world, we made a strategic decision 15 years ago to invest in renewable energy and low-carbon technology.” 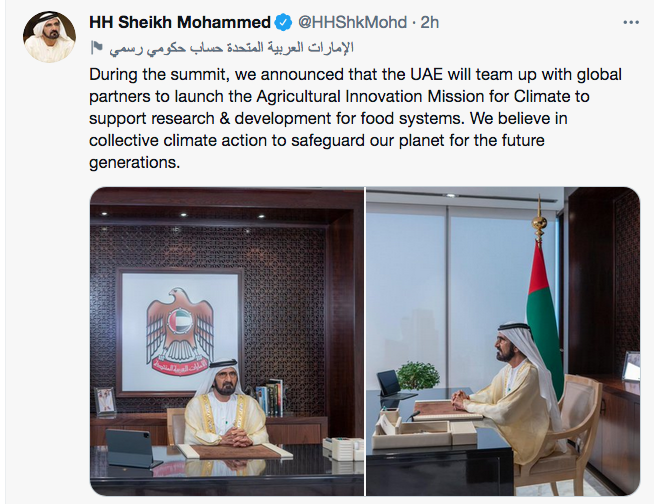 Sheikh Mohammed noted the UAE’s progress in the energy sector: “Today, we operate two of the largest solar plants in the world and we will soon break ground on a third that is even larger. The UAE is home to the International Renewable Energy Agency, and we also invested in successful renewable projects in 70 countries around the world by providing concessional capital that makes sound economic sense. We believe that renewable energy is the answer to building a better future for humanity.”

Sheikh Mohammed added: “In addition, the UAE was the first country in the Middle East to pioneer carbon capture and storage technology, and our oil sector is the lowest carbon emitter in the world.”

Sheikh Mohammed announced that the UAE will partner with other critical climate champions to launch Agricultural Innovation Mission for Climate (AIM-C) a new initiative to support agricultural research and development, and innovation for food systems over the next five years. 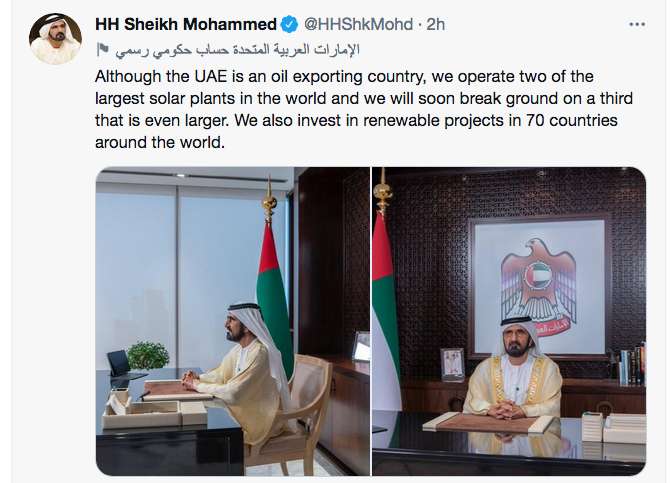