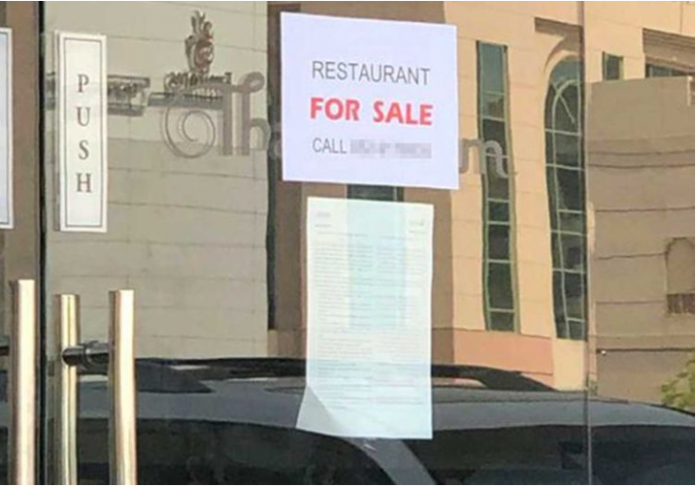 Dubai: Restaurant businesses in the UAE are starting to put up ‘For Sale’ signs, with their owners realizing there is no escape from the destruction set off by the COVID-19 pandemic. Licenses and even the equipment and furniture are being offered at steep discounts in hopes that someone out there will buy them.

“It’s a situation where for many if they try to open, it would mean more cash bleeding and which they will never recover,” said an industry source. “Only government-owned locations have been given rent deferrals or rent-free for up to three months. But the vast majority of landlords have not offered any such break. It will accelerate the destruction of the F&B industry.”

In Dubai, of the 11,000 outlets registered as F&B, anywhere between 40-50 per cent are unlikely to remain in business over the next few months, according to multiple industry sources. Some have already shut down their operations, stating they will not be able to generate even the bare minimum cashflow to keep the outlets going.

As of now, less than 30 per cent of UAE’s F&B outlets have re-opened, the majority of them being at the malls. But these openings have come with strict limits on the number of customers they can serve – 30 per cent of seating capacity – at any time.

For many F&B owners, it’s not these safety guidelines that are proving a problem – it’s the question of rents.

“I had begun my venture Wrapps NMG in the last week of January,” Niyati Patel, owner. “Having run it for 10 weeks, I’ve had to close down after the landlord rejected my request for rent waiver during the crisis period.

“As any other startup, I invested a huge amount… and a significant part of it was to the mall management, which included the three-month rental advance, three-month security, marketing fees, chilled water charges, fitout fees and deposit. Yet, my request for rent waiver or cheque deferral was brutally rejected by the management because they very well knew they hold the PDCs (post-dated cheques). They went ahead and deposited the cheque in the bank.

“Rent is the part of the operations and not the capital investment, yet there has been no support from the management considering the mall footfall has gone down by more than 95 per cent. They expect us to pay the full rent without any relief – which leads to an absolutely unsustainable business.”

Landlords are not hearing

Paying rents and the level of these rents are the main issues F&B businesses are confronted with. Even the most optimistic among them say they will find it difficult to return to pre-COVID-19 volumes at any time this year. Plus, the weeks during which movement restrictions are in place have left them with too big a revenue hole to fill up.

Apart from rents and costs such as for sourcing supplies, staff payments and utility bills, F&B businesses also have to pay VAT. There is no municipality tax imposed on them either, though restaurants operating within hotels will need to pay these fees.

“Rent levels are the single biggest destroyer of F&B prospects now,” said Shanavas Mohammed, Managing Partner at Golden Fork Group. “The way we see it, 60 per cent of restaurants may not able to reopen due to rental issues, where landlords have not offered any rental waivers.

“And the cash the restauranteur was holding would have been spent to sustain staff salaries for three months. Plus, telecom operators have disconnected internet and landline numbers at many outlets. Many restaurants are struggling to buy foodstuff to restart their business – the saddest part of all this is suppliers are only delivering on upfront payment.

“They have stopped all credit facilities for restaurants.”

F&B owners emphasize that matters have reached a situation where even rents being deferred – that is, where the cheques for March to May get presented to banks at a later date – will help much. Because no extent of deferment will compensate for the fact that revenues will still be way below normal even if full operations commence in the next few weeks.

“[Most] landlords have only expressed their interest in rent deferrals, which is absolutely insignificant,” Samer Zayat, CEO of Crown Concepts Group. “Every day we find more brands raising the white flag and declaring their inability to rebound from this devastating phase.

“Rent deferrals – instead of actual waivers covering the months of lockdown and three to six months post lockdown – only mean further closures in the near future.”

Hricha Saraf is Managing Partner of Bol Gappa Restaurant, is another who insists that rent waivers need to be there… at least until the year-end. “Given the current situation and restrictions imposed on dining, it doesn’t make sense to open our outlet for dining,” she said. “Our sales, which is largely delivery, are not sufficient to even cover the utilities and staff salaries.

“If support is not provided by way of rent wavier until end of year, we will have to shut down which will also result in job losses.”

The consultancy KPMG recently issued a state of the market update on key UAE retail sectors passing through the COVID-19 downturn. The impact on F&B segment is “more severe” – “Sales are down 30-80 per cent across concepts,” the report says.

“Operators expected food delivery to compensate to some extent. However, people cooking at home and concerns around hygiene appear to have dampened its promise.”

Closing down is the only option

The pandemic and the responses to it have impacted lifestyles, business activity and society at large. Once the virus spread is brought under control, it could all go back to how it was before.

But for many F&B owners, they will not be waiting around.

“My one branch in Jumeirah recently closed due to rents – it took me 15 years and Dh3 million to start,” said Divyendu Gupta, owner of Wok’s Den. “Now everything seems slipping from our hands.

“Customers love my brand but that is no sufficient to survive after commissions, rents and food cost. I heard nothing from landlords and each time they asked me to chase different departments.”