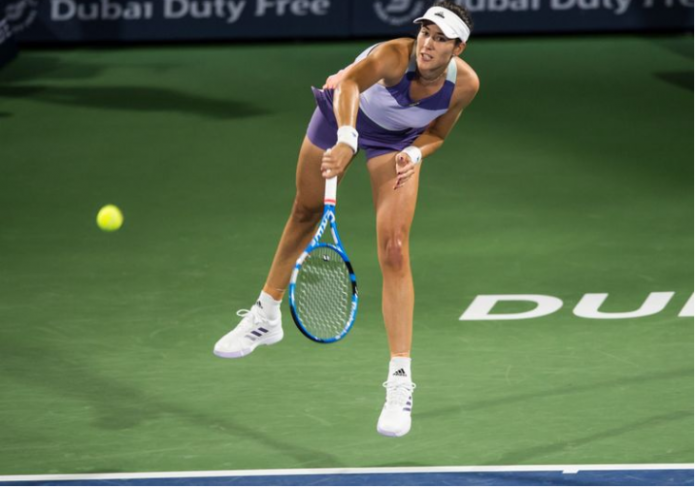 Dubai: “She’s going to give us all a hard time,” Garbine Muguruza blurted after defeating former world number one Kim Clijsters 6-2, 7-6 (6) in her second comeback on the WTA on the opening night of the Dubai Duty Free Women’s Open, late on Monday.

In a clash between two Grand Slam champions of two different eras, it was Dubai debutant Clijsters who earned a few more fans despite going down to a player ten years her junior. Clijsters displayed flashes of brilliance, made a full quota of unforced errors and double faults, and very nearly took a set off the 2020 Australian Open runner-up.

“I was expecting it to be hard against her. The key for me was to just stay calm,” Muguruza disclosed.

Though both players displayed early nerves, it was Muguruza breaking first to lead 2-0. The Spaniard had a second break in the seventh before saving three break points herself to serve the set out in 32 minutes.

The second set also began in a similar fashion as Muguruza ran away 3-0 clear with breaks in the first and third games. But the four-time Grand Slam champion, now 36 years old, clawed her way back breaking in the fourth and then again in the eighth to draw level and force a tie-breaker.

The mother of three didn’t just surrender in the tie-breaker. She was up 2-0, but Muguruza went 4-2 ahead. But the Belgian just hung in there and went for her shots to edge close at 4-5 and then 5-5 before the 26-year-old Spaniard sent down two good serves and end the contest in 97 minutes to a standing ovation.

Jabeur — who became the first Arab woman to enter the quarter-finals of a Grand Slam at last month’s Australian Open — battled a blister on her left foot while winning in three sets against a higher-ranked opponent.

At 18 and the second youngest player in the top-100, Anisimova showed maturity way beyond her years to match her 33-year-old opponent Barbora Strycova. The American teen surrendered the opening set on a tie-breaker. But, then she took her chances and drew level winning the second set 6-2.

However, in the final set Anisimova — who had defeated defending champion and world number three Simona Halep in straight sets to reach the 2019 French Open semi-finals — squandered a 3-1 cushion to eventually lose 6-4 in two hours and 34 minutes. “It wasn’t really a great match from both sides,” Strycova admitted.

“It’s really tough conditions out there and the ball is flying everywhere. But I was really happy to keep the ball in the court. It was a really tough match for me and I’m very happy to be in the second round,” the Czech girl added.

Wang — who produced one of the biggest upsets of the 2020 Australian Open while defeating Serena Williams in their third round encounter before going down to Jabeur — failed to advance beyond the first round after she was chased out 6-3, 6-0 by Mertens.