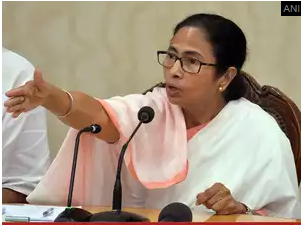 The assurance came hours after the Centre accused the Mamata Banerjee-led West Bengal government of obstructing a Central team deputed to assess the coronavirus ground situation.

NEW DELHI: The West Bengal government has said “it is not a fact” that there was no cooperation with the Central team deputed to assess the Covid-19 situation in the state and gave an assurance that it will abide by all Union government orders on lockdown.

The assurance came hours after the Centre accused the Mamata Banerjee-led West Bengal government of obstructing a Central team deputed to assess the coronavirus ground situation.

In a letter to Union Home Secretary Ajay Bhalla, West Bengal Chief Secretary Rajiva Sinha said it was not a fact that the two Inter Ministerial Central Teams (IMCTs) have not been provided with any cooperation by the state government since he had two meetings with one team and also was in touch with the other.

“This is to convey my highest assurances for the implementation of the orders of central government issued under the Disaster Management Act as well as the directions of the Honb’le Supreme Court,” the state chief secretary told the union home secretary.

The West Bengal chief secretary sent the letter Tuesday night, hours after the central government hadÂ directed the state government not to obstruct working of the two central teams.

The Centre had also accused the West Bengal government of not cooperating with the central teams and also said that the state government was specifically restraining the teams from interacting with health workers and touring the affected areas.

The West Bengal chief secretary wrote: “It is not a fact that the IMCT has not been provided with any cooperation by the state government”.

“In fact the teams had arrived without any prior consultation with us and, therefore, there was neither such opportunity to provide any logistic support as envisaged in the order dated April 19 nor the team asked for any help,” he said.

“In this connection, this is to inform that the IMCT in Kolkata led by Apurva Chandra met me in my office on April 20 and had an interaction about the implementation of lockdown measures and other efforts of the state government to contain and combat COVID-19.

“I am also in touch with Vineet Joshi of IMCT at Siliguri and have apprised him about the steps taken by the state government along with sharing of our reports on mail,” Sinha said.

He also said that he had another meeting with the team in Kolkata on April 21 at their place of stay at the BSF mess, Kolkata and shared the up to date reports.

“They are visiting different parts of the city to make an on the spot assessment of the implementation of the lockdown measures” the chief secretary said.

Sinha also referred to hisÂ telephonic discussions with Bhalla on April 21 and highlighted “the pro-active steps taken by the state government for effective implementation of lockdown measures to contain the spread of COVID-19”.

A total of six IMCTs have been deputed to Maharashtra, Madhya Pradesh, Rajasthan and West Bengal to review the implementation of the lockdown measures after making on-spot assessment of the situation prevailing in identified select districts.

Two of these teams have been sent to West Bengal — one team to Kolkata, Howrah, North 24 Parganas and East Medinipur and the other team to Jalpaiguri, Darjeeling and Kalimpong.

The teams comprise public health specialists and officers of the National Disaster Management Authority (NDMA), whose expertise can be leveraged by the state government for management of COVID-19 pandemic.

The teams were deputed under the authority conferred on the Central Government under Section 35 of the Disaster Management Act, 2005 which states that “..the central government shall take all such measures as it deems necessary or expedient for the purpose of Disaster Management”.

Bhalla, in his Tuesday’s letter, also quoted a recent Supreme Court observation that the state governments will faithfully comply with the directives and orders issued by the Union of India in letter and spirit in the interest of public safety.

The said observations of the Apex Court, the home secretary said, must be treated as directions and faithfully complied with.

The home ministry had on Monday said COVID-19 situation is “especially serious” in Mumbai, Pune, Indore, Jaipur, Kolkata and a few other places in West Bengal, and violation of lockdown measures risk the spread of the novel Coronavirus.

West Bengal’s ruling Trinamool Congress, however, dubbed the visit of the central teams as “adventure tourism” and asked why such delegations were not sent to states with much higher numbers of infections and hotspots.

TMC MPs Derek O’Brien and Sudip Bandyopadhyay Tuesday claimed that Chief Minister Mamata Banerjee was informed about the teams’ visit three hours after their arrival in the state, which they said was unacceptable.