Lady Gaga’s two French bulldogs, which were stolen by thieves who shot and wounded the dogwalker, were recovered unharmed...
Read more

Flying from UAE to Mumbai? Check these new rules for COVID-19 testing, quarantine

Dubai: Not all passengers flying from the UAE to Mumbai in the western Indian state of Maharashtra will have...
Read more

Messi returned for Barca after missing the final game of 2020 with an ankle knock and swung in a cross for Frenkie de Jong to divert home for the only goal on 27 minutes.

Although Ronald Koeman’s side began a potentially season-defining run of four consecutive away matches with a comfortable win, they remain a distant 10 points behind Atletico in fifth having played a game more. 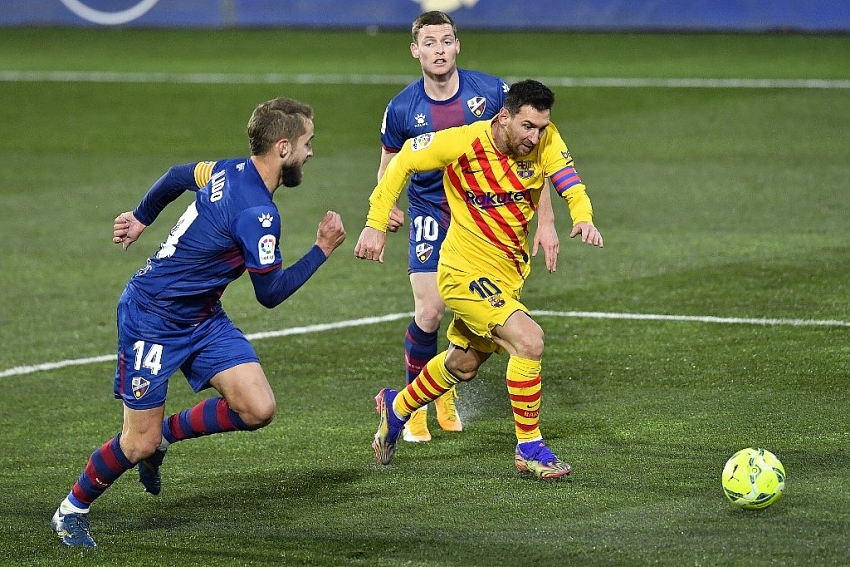 “In general, aside from the last 20 minutes we played well,” said Koeman.
“We created a lot of danger, which isn’t easy against a team that shuts up at the back. We got a great goal and we had two or three more chances to pull away.”

After De Jong’s opener Messi was denied a second just before half-time when Fernandez superbly clawed away his free-kick heading toward the top corner. 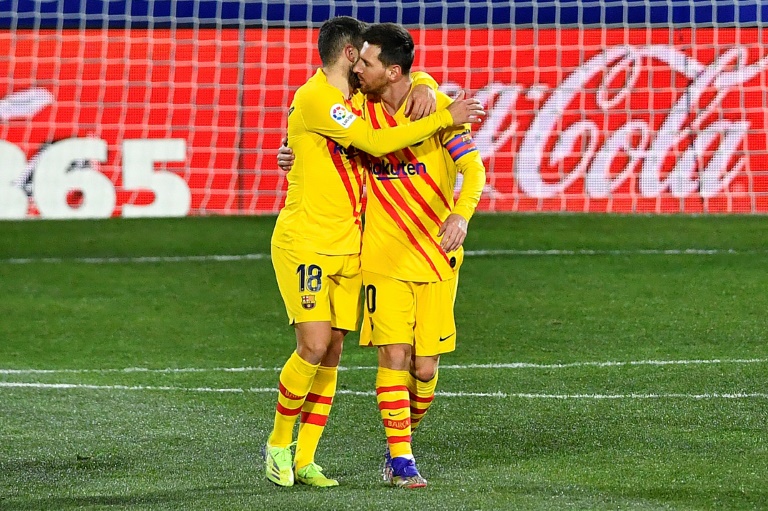 The Argentine was again thwarted by the legs of Fernandez in the second half after combining well with Pedri, moments after Marc-Andre ter Stegen reacted sharply to keep out Rafa Mir’s inventive back-heel.

That was a rare threat from Huesca who have now won just once in 17 tries this season but had taken points off most visitors to their Estadio El Alcoraz so far, including Atletico in September.

“We came out strong and very concentrated. It’s the main base we need. If we have that, we improve a lot with the ball and if we get better in front of goal then we can have a very good start to the year,” added Koeman. 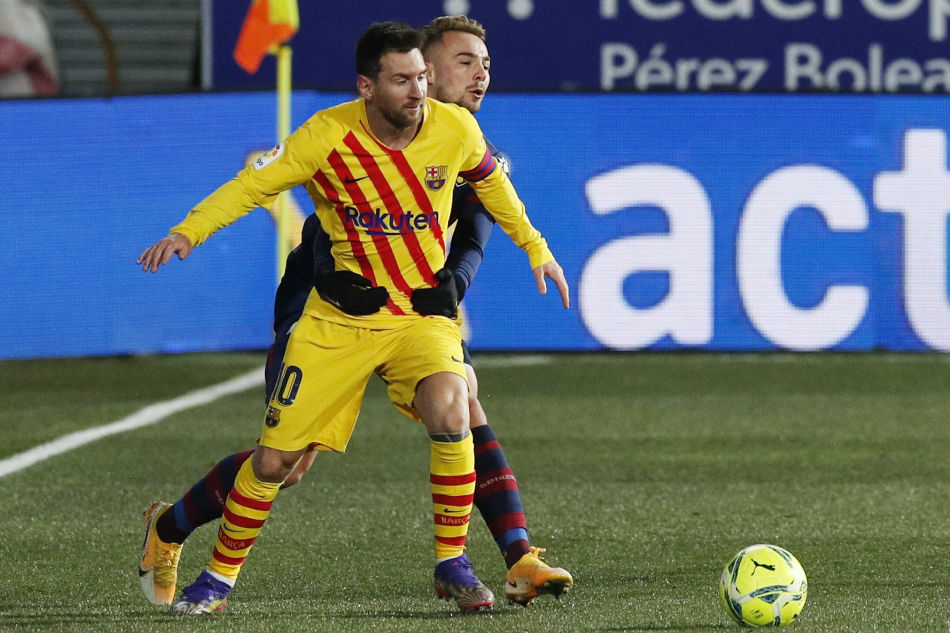 Earlier in the day, Suarez struck a 90th-minute winner for Atletico as they defeated 10-man Alaves 2-1 to move back above Real Madrid at the top.

Marcos Llorente gave Atletico the lead at Mendizorroza shortly before half-time with a deflected strike from just outside the area.

Diego Simeone’s side appeared to have the game under control when Alaves defender Victor Laguardia was sent off on the hour following a VAR review for chopping down Thomas Lemar as the Frenchman ran toward goal.

Florian Lejeune headed against the post for Alaves before a spectacular own goal on 84 minutes from Felipe threatened to cost Atletico two vital points, the Brazilian center-back drilling beyond Jan Oblak as he attempted to hack clear an attempted cross.

However, Suarez secured Atletico’s fourth consecutive win in the final minute as the Uruguayan tapped in from close range after the ball was slotted across goal by substitute Joao Felix.

“The best thing is how the team finished, not getting nervous, just playing. And the goal was a great goal,” said Simeone.

Atletico climbed two points clear of Real Madrid and have two games in hand on the defending champions.

“The takeaway from this is to continue on the same path,” added Simeone.Athletic Bilbao sacked coach Gaizka Garitano following a 1-0 home win over Elche, with reports in Spain linking former Barcelona boss Ernesto Valverde to the vacant job.

Real Sociedad lost more ground on the top two after they could only manage a 1-1 draw at home to struggling Osasuna, while teenager Bryan Gil scored both goals in Eibar’s 2-0 defeat of Granada.

Cashback Offres : Cashback of 500 rupees is available on booking LPG Cylinder from Paytm, avail this way

Lady Gaga’s two French bulldogs, which were stolen by thieves who shot and wounded the dogwalker, were recovered unharmed...
Read more
Latest News

Flying from UAE to Mumbai? Check these new rules for COVID-19 testing, quarantine

Dubai: Not all passengers flying from the UAE to Mumbai in the western Indian state of Maharashtra will have to undergo a COVID-19 test...
Read more
Business

KARACHI: The buying rate of the (AED TO PKR) was Rs 43.26 while its selling rate was Rs 42.8 in Pakistan’s currency market on...
Read more
Business

Today USD to PKR (Dollar Price in Pakistan Rupee) exchange rate given below. All Currency prices are updated every hour to offer you the...
Read more

Sevilla's Diego Carlos and Luuk de Jong got on the scoresheet to secure a fifth La Liga win in a row as their side...
Read more

Sterling on target as City edge past Arsenal

LONDON: The Manchester City winning machine ploughed on relentlessly towards the title with a 1-0 Premier League defeat of Arsenal courtesy of Raheem Sterling’s...
Read more

Bahrain is set to stage the Formula 1 pre-season testing for the first time since 2014, in addition to the first race of the...
Read more