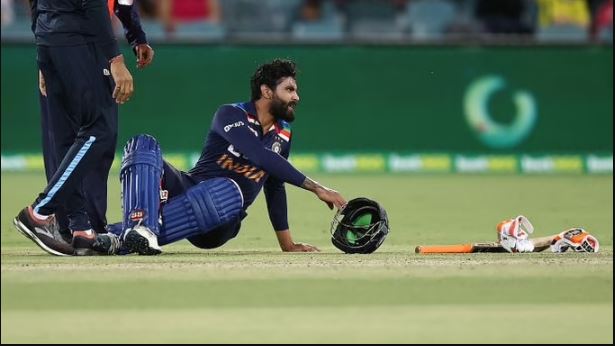 Canberra, Dec 4 (IANS) All-rounder Ravindra Jadeja, who sustained a concussion during the first T20 against Australia here on Friday, has been ruled out of the remainder of India’s three-match T20 series, the Board of Control for Cricket in India (BCCI) said on Friday. Pacer Shardul Thakur has been included in the T20 squad.

Jadeja was hit on the head while playing a shot in the last over, bowled by speedster Mitchell Starc. He sustained a concussion, and Thakur has replaced him in the squad.

“Ravindra Jadeja sustained a concussion after being hit on the left side of his forehead in the final over of the first innings of the first T20I against Australia in Canberra on 4th December 2020,” the BCCI said in a statement.

“The diagnosis was confirmed based on a clinical assessment in the dressing room during the innings break by the BCCI medical team. Jadeja remains under observation and will be taken for further scans if required based on the assessment on Saturday morning. He will not take any further part in the ongoing T20I series,” it said.

Yuzvendra Chahal replaced Jadeja as a concussion substitute during Australia’s innings. Batsman Sanju Samson later said that Jadeja told his teammates he was feeling dizzy after the innings.

“The physio (team’s medical staff) knows his condition better. We don’t have any information yet. We saw him (Jadeja) getting hurt. When he returned he said he was feeling dizzy. We had to go for a concussion substitute,” said Samson in the post-match press conference.

Jadeja also seemed to have hurt his hamstring and was seen limping off the pitch after the innings.

Australia coach Justin Langer was later seen having an animated discussion with match referee David Boon, also of Australia, during the innings break after Chahal came on as a concussion substitute.

Chahal went on to be declared Man of the Match as India won the game by 11 runs and Australia all-rounder Moises Henriques clarified that it was the fact that Jadeja was being replaced by Chahal that irked the hosts.

“I think the concussion was fine. If the player gets hit on the head, he needs to be replaced if doctor thinks, it is fine. But it will have to be like-for-like, that is the only thing for me. These are the rules of the game whether players like or not but moving forward, to make it fair, I think like-for-like replacement is the way to go,” Henriques said.