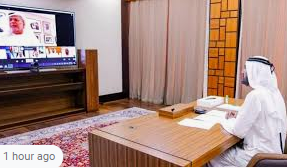 The law aims to protect the society in times of disasters and emergencies that threaten the health, economy and environment.

A new draft law to protect national safety has been approved in the UAE. His Highness Sheikh Mohammed bin Rashid Al Maktoum, Vice-President and Prime Minister of the UAE and Ruler of Dubai, said on Tuesday that the law would determine when a state of national safety was required, its duration and the entity responsible for making such an announcement.

Taking to Twitter, Sheikh Mohammed said the law passed by the UAE Cabinet aims to protect society during disasters and emergencies that threaten the health, economy and environment of the country.

Sheik Mohammed has also approved the formation of a team that will study the possibility of converting government buildings into store houses for the health sector. “All of the government’s resources will be made available to help the country pass through these exceptional circumstances,” Sheikh Mohammed tweeted.

The Cabinet also approved the formation of a team to develop “modern agriculture”. This team will use technology to increase the production of crops in the country. The team headed by the Minister of State for Food Security will work towards ensuring food sustainability, Sheikh Mohammed added.v