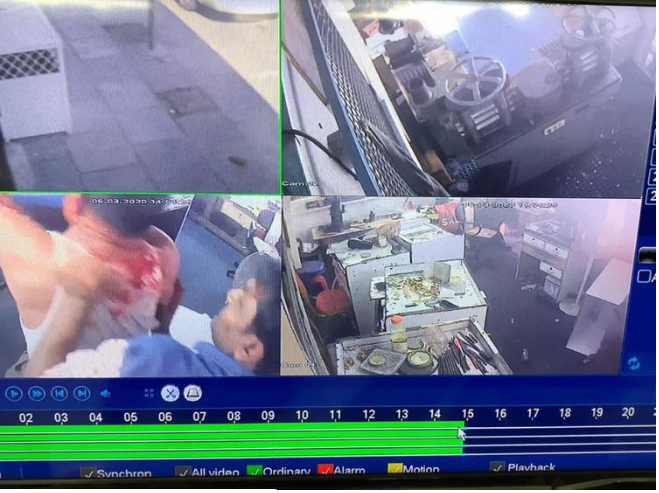 Sharjah: Sharjah Police are on the lookout for three men who attacked and robbed their sponsor of 4kg of gold biscuits from his gold workshop at Al Mareija in Sharjah, before catching a flight to India within an hour.

The incident occurred on Friday afternoon when the three Indian workers attacked their 57-year-old Bangladeshi sponsor, SD, snatched the gold and passports from a locker and fled.

The footage showed the workers attacking the owner and hitting him with a steel rod.

The police have issued an arrest warrant and informed Interpol.

Shishir Kumar Das, 23, the eldest son of the victim, told Gulf News Friday was fateful day for the family. He said his paternal grandmother passed away in Bangladesh and he had gone to the workshop to pick up his father who was in mourning.

“On Fridays, the workshop is open from 2pm to 6pm,” he said, but added that by the time he reached the workshop at 3pm, he found it closed.

Thinking his father must have left the place, he returned home, only to find that he was not there.

When he and his brother repeatedly called his father, he got no answer.

The family then went into a panic and started looking for SD. When they could not find him, they reported a missing case with the Al Gharb Police.

Das said they also searched the workers’ accommodation located on the opposite side of the workshop.

By 11.30pm, Das, along with his father’s friends, decided to go into the workshop which appeared locked. It was then that they found that it was only partially locked. With the help of a duplicate key, they managed to gain entry.

When they entered the place, they found that their father’s customary cup of tea remained unconsumed on the table. The place smelled of gas and one of the machines was still working. A little farther, they found SD lying on the ground, bleeding. He had suffered a deep wound on the back of his head. His neck bore strangulation marks as well.

They immediately called the police and the ambulance. SD was rushed to Al Qassimi Hospital at around 2.17am.

CCTV footage showed that while two of the three workers attacked SD inside, another stood outside and kept watch.

When police tried to trace them from the details provided by the owner’s family, they found that they had left the country to Mumbai.