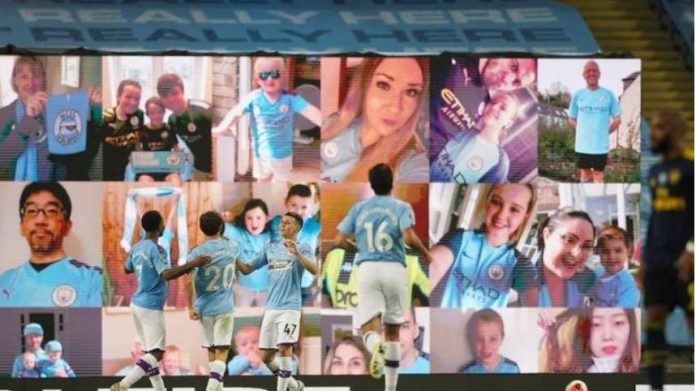 It didn’t look like a football match, it didn’t sound like one and it didn’t smell like one, but the goal of restarting the Premier League was achieved on Wednesday as Manchester City beat Arsenal 3-0 at the Etihad stadium.


Although the absence of spectators, inevitably, meant a strange lack of atmosphere in the ground and for the millions watching on television globally, the rhetoric about the sport being pointless without fans, was not supported by the evidence of the 90 minutes on the field.

The league had officially ended its enforced three-month absence due to the coronavirus lockdown, with Aston Villa’s 0-0 draw at home to Sheffield United a couple of hours earlier but the prime time slot was saved for title-holders City against 13-times champions Arsenal.

It was business as usual on the field with City deserved winners thanks to goals from Raheem Sterling, Kevin De Bruyne and Phil Foden while Arsenal were clear second-best, hampered by early injuries and the sending-off of error-prone substitute David Luiz soon after halftime.


Everything else about the night, however, was very unfamiliar.

Sterility was, of course, the goal. Outside the ground the food stands were closed, there were no fans gathered and the only indication of a game being played were security staff – like everyone else wearing face-masks.

The only reminder of a normal match night was the smell of the fish and chip shop adjacent to the ground, which wafted across the perimeter of the Etihad, without the usual competition from burger vans.

Inside, City had tried their utmost to bring some sense of life to the empty venue with flags and banners placed on the bottom two tiers of the stands to cover up the empty seats.

Messages from fans around the world were broadcast on video-screens and the PA system did its best to replicate some of the usual soundtrack to a game with pre-match music and team announcements.

The players, as they have done in Germany’s Bundesliga, Spain and Italy, who had returned to action in the past weeks, adjusted to the new reality of behind-closed-doors football well – quickly settling into the rhythm and intensity one would expect.

There were no signs of players lacking commitment or focus without the noise of a crowd and the only concern would be the two early injuries for Arsenal, which may reflect the impact of the enforced lengthy absence from the field.


But footballers can adjust to most things and if the collection of international stars needed any reminder of where they were despite all the strangeness, a traditional Manchester downpour at kickoff appeared to do the trick.